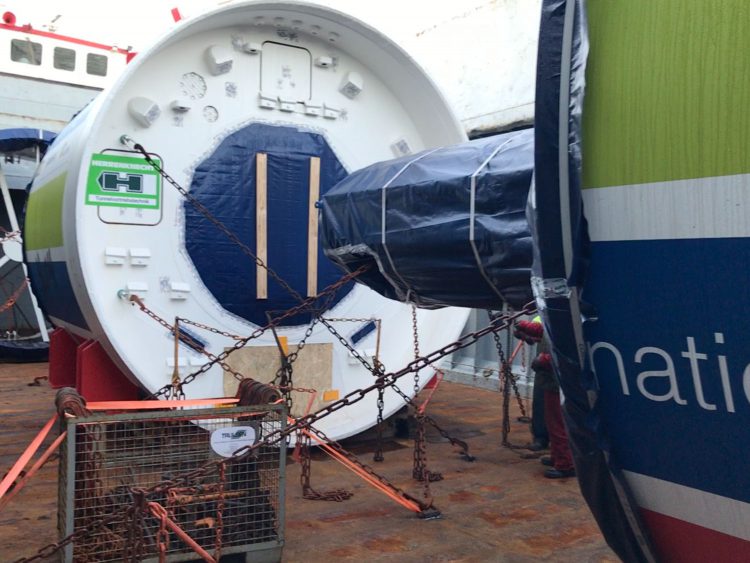 If you follow the project forwarding press you may have seen reports on our joint venture partner Fracht’s, multi-modal transportation of the 515 tonne tunnel boring machine, Mary from the recently completed River Humber utility tunnel to its home in Germany, while a second boring machine transported by Fracht has claimed a world record.

The longer the tunnel, the more tunnel boring machines are sought by engineers, because they are so efficient, resulting in shortened completion times.

Comprising cutter head, shield and primary machinery, tunnel boring machines are complex and expensive to construct and, given their immense size and weight, difficult to transport.

Fracht has been transporting tunnel boring (TBM), shaft boring (SBM) and vertical boring (VSM) machines for over two decades and has immense experience in the safe handling of these engineering giants, which vary in size but are always cylinder-shaped and heavy.

Transported from its German base to site by Fracht, TBM (Mary) recently completed a 5km tunnel under the River Humber, for a high pressure gas pipeline from Goxhill to Paull, for the National Grid. Weighing it at over 500 tonnes TBM Mary is more than 190 metres in length.

Another Vertical Boring Machine (VSM) transported by Fracht from Germany to a North Yorkshire mining site, has broken the VSM depth record by 43 meters. The 435 tonne machine is now being decommissioned by the Fracht team, before following TBM Mary back to Germany.

Fracht planned and executed the safe transportation of TBM Mary, from her German base in Baden-Wurttemberg to the River Humber site 18 months ago and now the same team is returning Mary to Germany, for servicing and refurbishment ahead of her next project.

Starting with site and route surveys, the Project team at Fracht prepared every step of TBM Mary’s journey to and from the River Humber site, including lifts, lashing and load plans on specialised road transport equipment, on a chartered vessel for shipment across the North Sea to Rotterdam where Fracht’s team waited to secure the components by floating crane to barge, for upriver movement to Germany.

Prior to transport Mary was broken down to 21 pieces for decontamination, with particular attention to potential contaminates on the 30 tonne cutter head, 70 tonne shield, 95 tonne machine can and 20 tonne tail shield.