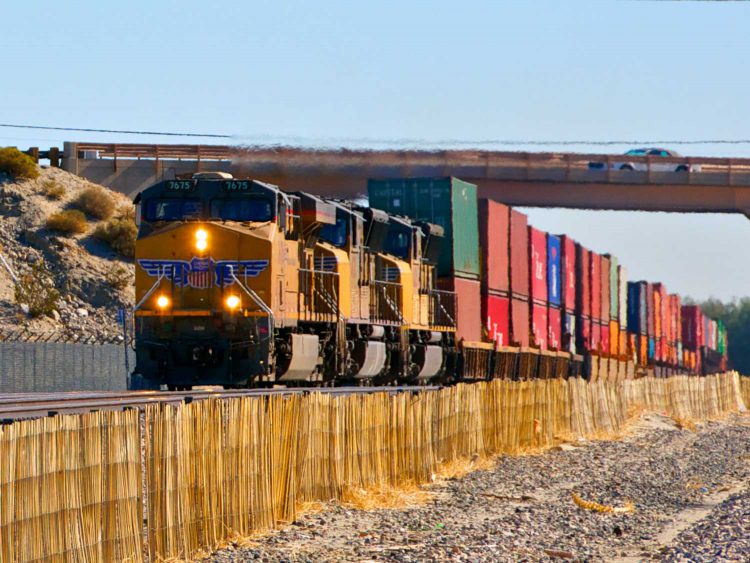 Capacity from Asia to the West Coast will be 20% higher through September, than last year, but inland supply chain disruption is continuing and threatens to wipe out any benefit from the increased capacity.

Carriers serving the US West Coast will have 20% more peak-season capacity from Asia, compared to the same period in 2021, by the first week of October and we are watching developments closely, as what transpires on trans-Pacific routes tends to be mirrored on the European lanes within weeks. The trades are thoroughly interlinked with trends and how they operate, quite often one event on the route effecting the other routes from Asia to Europe.

Despite the ability of Los Angeles/Long Beach to process boxes from ship to shore, the uplift in capacity may be significantly diminished, because there are insufficient railcar assets at terminals to bulk move containers away from the ports. Container dwell times at the West Coast ports shot up to a record 13.3 days in June, when the average dwell time should be no more than three to four days to prevent stacked containers from compromising operations.

A fortnight ago Long Beach had 12,650 rail containers on dock, while Los Angeles had 31,186, of which 23,880 were sitting on the terminals for nine days or longer, when there should be none.

Chassis providers complain that shippers are taking twice as long to release marine chassis, compared with pre-pandemic, while other shippers are simply leaving import containers in rail and marine terminals because they have inventory clogging their warehouses.

Much of the blame for the current situation is being laid on the biggest retailers, who are not keen on taking in more inventory amid slowing sales, because they do not have available storage space, which means backlogs build back from their warehouse doors, through the inland transport ecosystem.

In other developments, despite the Ocean Shipping Reform Act of 2022 becoming law in mid-June, to provide oversight of container storage fees and revised rules on loading exports, calls are growing to end the antitrust immunity currently enjoyed by container lines.

The lines warn that the benefits of more services to more places, delivered more efficiently, would be undermined if legal certainty for operational agreements were removed. FMC chairman, Daniel Maffei, has floated the idea of increased monitoring of alliances and has also warned that shippers would suffer without the vessel-sharing agreements.

The International Longshoremen’s Association has also voiced support of vessel-sharing agreements because they provide more frequent service at a lower cost, which includes calls at small and medium-sized ports, that would no otherwise be served.

The ILWU and marine terminal employers have reached a tentative deal on health benefits for West Coast dockworkers, which is a positive move towards an overall agreement on a new labour contract.

Sources close to the negotiations believe that the likelihood is growing that a deal will be reached in August or September with little disruption occurring on the docks.

It is interesting to observe the North American markets as often many of these situations are emulated in The UK and Europe a few weeks later. Due to the shorter quay to quay transit times on the Transpacific routes its acts as a barometer on the Asia/ Europe trade so it is well worth following the market in USA and Canada and Americas as a whole as they are as significant in Boston in Lincolnshire as they are in Boston in Massachusetts.

We are working closely with our offices and network partners in North America to monitor these developing situations, set up contingency platforms and ensure product is delivered to market, without delay, however the peak season develops.

Our services continue to be among the most reliable in the market, thanks to our fixed validity contracts and access to our own dedicated fleet of vessels to further enhance access to container slots.

Contact Elliot Carlile to learn more about our US capabilities, or to discuss your supply chain requirements, as we enter peak season, so that we can ensure you are prepared for the increased market activity.