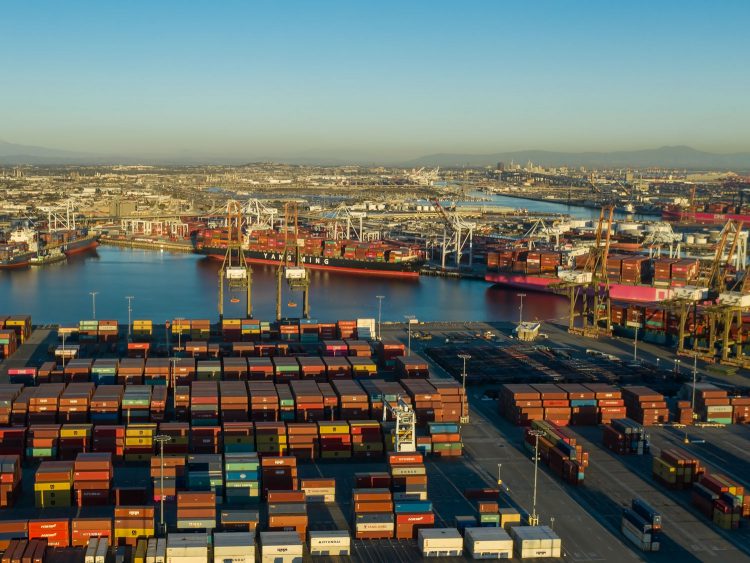 Congestion levels at the major North America container gateways is expected to continue into the summer, as container imports from Asia grew a massive 31% year on year.

With 1.57m teu arriving at US ports from Asia last month, the highest level on record, the container import boom shows no sign of slowing as lockdown eases, with high volumes set to stay for months.

As a by-product of this imbalance into North America this has had a major impact on European origin boxes arriving into The US as we have seen over recent months impacting freight rates and capacity availability.

The Los Angeles/Long Beach gateway has borne the brunt, handling 3.1m teu, in the first months of 2021, an increase of 46% on the same period last year.

At the end of last week at the Port of Los Angeles there were 10 vessels at anchor waiting for a berth and Long Beach had nine waiting. At the beginning of this week the queues had been dealt with, but despite both ports working to increase the speed of cargo through their terminals, they are constrained by intermodal capacity limits.

Hapag-Lloyd has warned that all west coast terminals remain extremely congested and the congestion is expected to last all the way through the summer. They believe that LAX/LGB rail operations from all terminals will deteriorate due to the lack of rail capacity and railcars from UP rail, which is affecting significant on/off dock intermodal movements.

Congestion and chassis shortages at inland rail hubs, especially in Chicago, and the difficulty railroads face in running full intermodal trains back to the West Coast because US imports exceed exports, are major contributors to the congestion problems affecting West Coast ports.

Oakland is dealing with vessel bunching that now rivals the backlogs at Los Angeles-Long Beach, with the number of vessels forced to wait at anchor for berthing space consistently above 20, and was at 25 on Thursday, according to the port.

In the first four months of the year, Oakland saw imports from Asia up almost 32% from the same period in 2020, and almost 26% higher than the same period in pre-pandemic 2019. At the same time, however, it saw exports decrease in April by 3.1%, year on year, due to the continuing shortage of containers available to US exporters.

By contrast, US east coast ports which handle Asia imports via the Suez Canal, saw lower volume growth of 33% in the first four months of 2021, compared with the same period in 2020.

While exports and empty inventory have eased recently, congestion focuses on the import surge over the last month. This has a knock on effect with smaller, but still high demand, levels of containers movements to and from Europe.

When America sneezes the world catches a cold – let’s hope the cure is quick and well administered.

While congestion is inevitable at many locations, we continue to do everything we can to ease its impact, offer support, and provide alternative solutions where necessary.

We will continue to monitor and report on developing disruptions, overcoming any challenges, in partnership with our dedicated teams and colleagues in America.