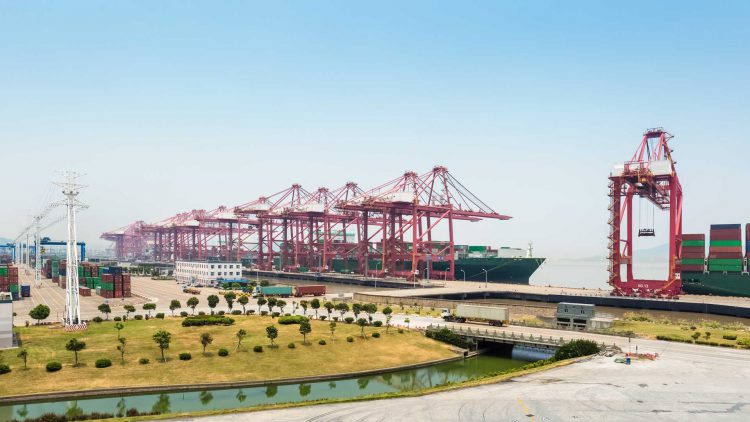 Despite the Ningbo port authority claiming that it had been able to work at 90% capacity in recent days, many ships are switching to different terminals and AIS data shows around 50 container vessels waiting at the outer Zhoushan anchorage.

Operations were suspended after a 34-year-old worker at the Ningbo Meidong Container Terminal (part of Ningbo’s Meishan bonded area) tested positive for COVID. More than 90,000 people have been tested over the past week with no further positive cases reported.

We are receiving (as yet unconfirmed) news that Ningbo’s shuttered Meidong container terminal will start a phased reopening tomorrow.

To clear the backlog of cargo, no new cargo will be accepted until the 25th August, with normal operations resuming from the 1st September.

The timeline is similar to the way Yantian reopened in June and will be in accordance with China’s COVID-19 policies.

Though significant, the disruption at Ningbo is significantly less than that which followed the Yantian closure, for around a month in May.

Port authorities claim that container volumes at Ningbo-Zhoushan port averaged 77,000 TEU a day between Wednesday and Friday last week, equivalent to 90% of the daily average in July.

We are now on day seven of the closure and ships are being diverted to other terminals in Ningbo and other ports, including Shanghai, which are already running at full capacity, in the aftermath of Typhoon In-fa, with some imposing restrictions limiting the number of people and containers entering port areas.

Gate-in for export containers at other Ningbo terminals is limited to two days before a vessel’s estimated time of arrival, although entry to the container yard can be up to three or four days depending on the situation.

The closure of the Ningbo Meidong terminal is likely to lead to problems with trucking as well, as average wait times are currently 2-4 days and you can add another day onto dwell time for every day Ningbo Meishan terminal is closed.

Our commercial and operations teams work closely with our partners across Asia and while we expect the situation in Ningbo will improve swiftly, after Meidong reopens, we will continue to assess its impact on a shipment by shipment basis.

For urgent and must have shipments from Asia, we have access to freighter capacity from our Sea/Air hub in Singapore and can move consignments of up to 200cbm per flight to Europe.