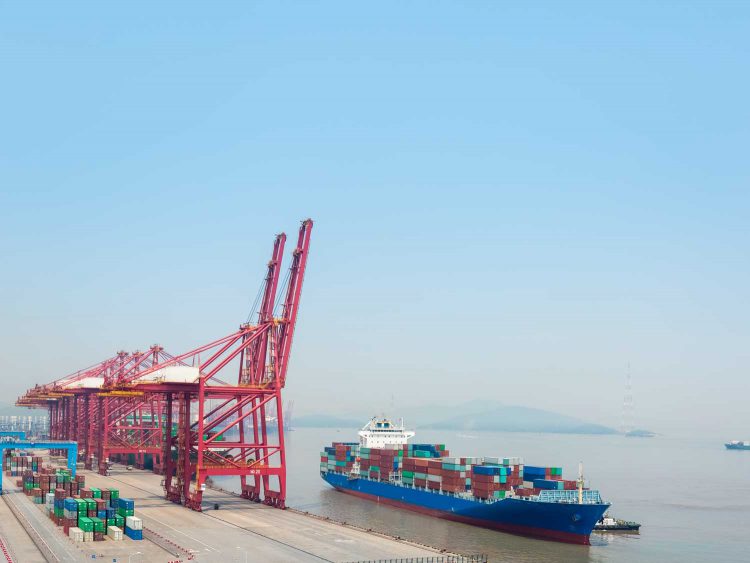 Just two weeks since the Ningbo-Zhoushan containers terminal closed after a worker tested positive for COVID-19 and container port congestion has spread across China and many other regions.

Data from consultancy eeSea highlights how global container port congestion has grown over the past fortnight in China and neighbouring nations, yet has momentarily eased in Europe. Not unsurprising as there is a lag between departure and arrival of vessels, as they transit from Asia to Europe, so we may see impacts in coming weeks, as delayed vessels begin to arrive.

The maps show congestion today versus two weeks ago, with 48 container ships currently waiting at Ningbo-Zhoushan and a percentage of 65% of vessels waiting versus in port.

The average number of weekly port calls to Ningbo fell 22% from 188 container vessels to 146 in the first week of closure, but the total vessel capacity calling at the port only dropped 7.8%, because the other four terminals at the port absorbed the inbound and outbound container traffic redirected from Meishan.

Outside of east Asia, there has yet to be a major spill over from the Ningbo closure into other Asian ports. The port authority in Ningbo-Zhoushan is slowly implementing a reopening of its Meishan terminal, a facility which accounts for around 20% of the approximate 30m teu that pass through the port annually.

Throughput will be increased in phases to reduce the backlog of containers, with resumption of container gate operations due to start yesterday and a full reopening scheduled for the 1st September. This will take time to filter through into carrier schedules and reliability and will not be an immediate ‘fix’.

Chinese authorities have been stringent with COVID testing. Many ports (and airports) are requiring nasal swab tests for entire crews, forcing vessels to remain outside the harbour until negative results are confirmed. And many ports are requiring vessels to quarantine for two to four weeks if they were previously berthed in India, where the delta variant surged during the summer and continues to have an impact throughout Asia.

The risk of a coronavirus outbreak at Chittagong port is rising as the presence of the deadly virus was detected in the crews of two vessels in the last week and a crew member of the 11,000TEU YM TRAVEL, was tested positive for COVID-19, resulting to schedule delays for its transpacific service. This is in a country that is only just coming out of strict government  lockdowns and has huge issues with congestion already at the port, which is also having a huge impact on aviation from Dhaka globally as ocean freight delays prevail.

Retailers and other importers are increasingly trying to switch from ocean to air transport to make up for huge production slowdowns in Vietnam due to COVID-19, with air freight rates rapidly escalating because of the spike in demand.

The shift to air follows the Vietnamese authorities response to rising numbers of COVID-19 cases in the south, in extending by a month stringent controls on movement that have crippled factory production and sharply reduced freight activity at ports and airports. Many factories remain closed.

According to the Vietnam Textile and Apparel Association, nearly 90% of the industry’s supply chain has been significantly impacted by the partial lockdowns, with up to 80% of garment and textile companies in the southern provinces completely halting production. In the north, about 20% to 30% of the textile and apparel suppliers have halted production.

COVID-19 is also affecting Cambodia, which is complicating land-air shipments via Saigon and Bangkok. The rate from Thailand’s capital has more than doubled from pre-pandemic norms.

Our commercial and operations teams work closely with our partners across Asia and while we expect the situation in Ningbo and surrounding ports will improve, as Meidong reopens properly, we will continue to assess its impact on a shipment by shipment basis.

For urgent and must have shipments from Asia, we have access to freighter capacity from our Sea/Air hub in Singapore and can move consignments of up to 200cbm per flight to Europe as an alternative to restricted pure air freight services from many origins.