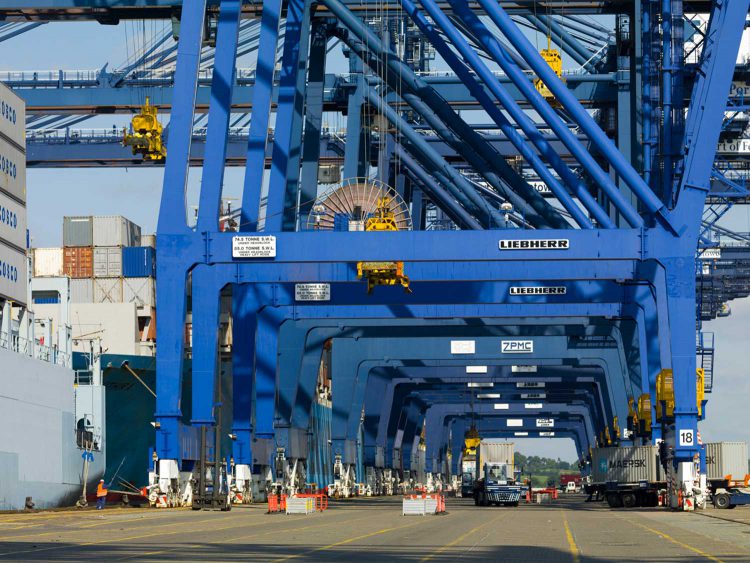 High vessel volumes, spikes in container throughput and diminished operational capability due to COVID safe-working is creating high yard density at the port, resulting in terminal-wide congestion which means vessels are unable to complete empty loading or have diverted to other ports, not loading export containers.

Import volumes at Felixstowe have been 30% higher than usual in recent weeks and with port efficiency diminished by the COVID crisis, congestion has followed and now means that vehicle booking slots are substantially reduced and even not being issued.

The restitution of empty containers has been interrupted and some vessels are omitting or diverting from the port, to safeguard schedules.

The port has apologised to customers for “inconvenience” and acknowledged that there is high demand for road and rail capacity, caused by a spike in import container volumes, which they say has been exacerbated by a high proportion of late vessel arrivals.

It said it was taking measures to improve service levels, which included increasing its much-criticised vehicle booking system availability to more than 4,300 vehicles a day.

Anecdotally we have heard from hauliers that they have been able to obtain any VBS slots and some of the largest operators are obtaining less than 50% of their usual daily allocation.

The shortage of VBS slots is persisting despite hauliers and many receiving warehouses working overnight and outside peak periods.

Maersk, OOCL and other carriers have warned customers of delays discharging containers from vessels and longer turnaround times for trucks, as well as import containers missing rail connections.

STOP PRESS 1 – CMA CGM has announced a Felixstowe Port Congestion Surcharge of USD 150 per TEU effective from the 1st October. MORE TO FOLLOW

The slow working and landside congestion had prompted some carriers to divert to Southampton or London Gateway, or to ‘cut and run’, leaving UK containers on board for discharge at the next port, with export boxes left stranded on the quay.

In breaking news, Chris Lewis, formerly MD at Southampton and London Gateway, has been appointed CEO of Hutchison Ports UK, with responsibility for Felixstowe, effective from 1st November 2020. Chris has a history of success and is popular with team members, so this announcement is a positive development for the port, though any benefits for users is unlikely to be felt before 2021.

Felixstowe will be working hard to restore service levels, as vessels continue to omit and divert from FXT, to discharge at London Gateway or Southampton, or on the continent, which adds to transit times.

Metro’s experienced transport team is working hard to maintain communication of the situation with our colleagues and our customers, particularly as it is becoming difficult to provide timely deliveries, despite everyones efforts.

The backlog of haulage demand at Felixstowe is approaching two weeks, with Cosco suspending line haulage operations across the UK yesterday and CMA CGM diverting restitution to London Gateway.

While these developments will place even more demand on an overstretched merchant haulage resource, we will continue to work with our customers to find flexible solutions and alternative options.