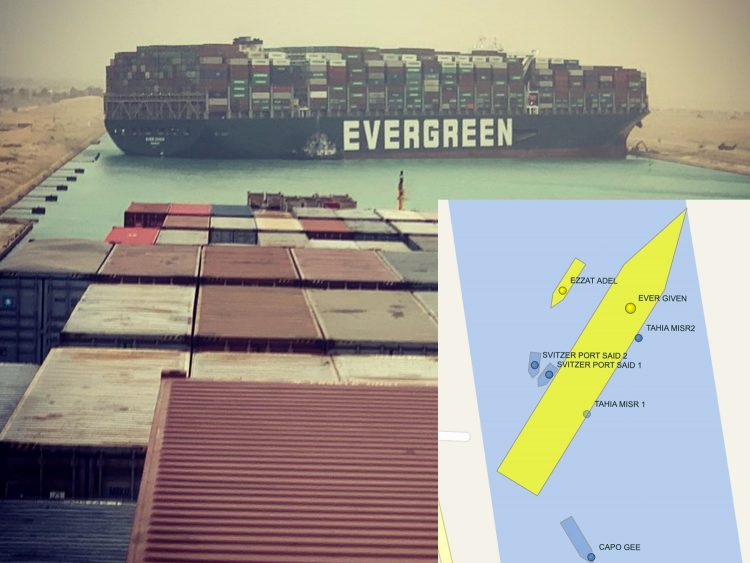 As of noon today the ultra large container vessel Evergreen Ever Given remains lodged sideways in the main channel, blocking vessels in both directions along the Suez Canal, creating one of the worst shipping jams seen in years and threatening even more chaos, when the grounded vessel arrives in Europe, together with the vessels behind it and in front of it. Currently there are hundreds of container vessels, oil/ gas tankers and other shipping awaiting entrance into the Suez Canal, which remains closed to traffic.

The 20k+ TEU Ever Given ran aground diagonally across the single-lane stretch of the southern canal on Tuesday morning, after losing the ability to steer in high winds and low tide overnight has slowed efforts to dislodge the 400 metre long container ship.

Pretty much all vessels from Asia destined to the Mediterranean and  Europe sail through the Suez Canal, with an average capacity of 380,000 TEU per week on this one lane, which is equivalent to 55,000 TEU of cargo arriving in Europe daily. This means there is (potentially) a 110,000 TEU spike, and growing, of delayed vessels into Europe and the consequences will be much deeper than the closing of the Suez canal currently.

In addition to the inbound stress on European ports, the spike simultaneously delays the movement of 55,000 TEU of export loaded and empty containers back to Asia every day, which is going to impact the numbers of empty containers available in Asia, which is already suffering its own trauma.

There have not been many cases of ultra-large vessels running aground, but when the 19,000 TEU CSCL Indian Ocean ran aground in the Elbe river in 2016, it took 6 days to get the vessel re-floated.

Shipping lines will be considering how long they wait before they begin diverting vessels around Africa on Asia-North Europe and Asia-USEC services, adding a week to transit and using a lot more fuel.

The longer the canal is closed, the larger the queue of vessels will be lined up to transit it, which means that additional waiting times must be anticipated even when the canal does open up again. There are restrictions and limits in the number of vessels that can access the canal per day so it may be that a 72 hour impact actually takes significantly longer to repair and unwind.

AIS tracker shows that when the Ever Given got stuck there were three vessels immediately behind: Maersk Denver; Asia Ruby; and YM Fountain.

As of this morning YM Fountain has been reversed back out of the southern end of canal and Asia Ruby is in the process of reversing back out of the canal assisted by a number of tugboats. Maersk Denver – the vessel right behind Ever Given – remains at anchor in the canal.

Click HERE to check out the live real-time AIS visibility of the number of vessels effected on the Marine Traffic site.

Julianne Cona, an assistant engineer on the Maersk Denver, which was directly behind the Ever Given, posted the above picture on Instagram showing the vessel blocking the entire canal, with a digger on the eastern bank attempting to dig the ship free.

We are monitoring the situation in the Suez closely and will share any updates on our social channels.

The situation is being monitored hourly by Metro and our ocean freight teams. The impact could be significant on the industry if the Ever Given is not re-floated today and the situation continues, which is looking increasingly likely as the next high tide is not until tonight. We are hopeful that the canal authorities will be able to move the Ever Given tonight, or tomorrow morning, but our local partners advise that the canal will take into next week to recover.

Not only are there hundreds of additional vessels that are now unable to continue their transit, but the impact on UK and European ports will be felt in coming weeks, as vessels are even further off of schedule and once released there will be a rush to the berths to discharge import containers and re-load export laden and empty boxes back to Asia.

The container handling infrastructure will likely buckle throughout Europe as a consequence of this rather large ‘butterfly flapping its wings in the Sahara desert’, as the saying goes.

Let’s hope that the experts and engineers can resolve the issue as soon as possible and the resulting issues are limited, although we suspect that this will have an impact for weeks to come.

Once we have further news and updates we will continue to keep all clients advised of the situation.

For further information please contact your Metro account manager and team for advice. Or Ian Barnes and Grant Liddell for escalation of any urgently effected shipments.