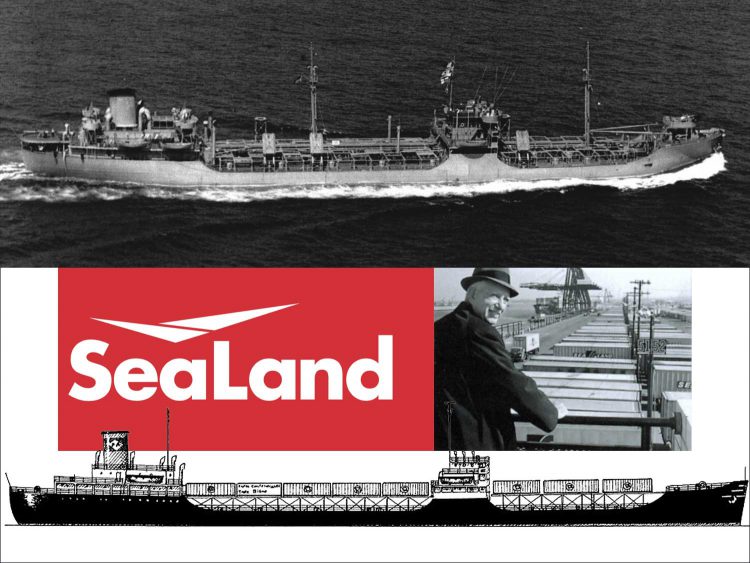 Sixty five years ago saw the beginning of containerisation, with the inaugural voyage of the first container ship, the Sea Land Ideal X on the 26th April 1956. Today, despite its best efforts, the container shipping industry is swamped by the continuing deluge of pandemic and lockdown related trade, with resulting delays, rising costs, ongoing disruption and challenges to supply chains.

The modern shipping container owes its origins to an American truck driver called Malcolm McLean who, in the years before the Second World War, wasted many hours waiting for his truck to be unloaded and the goods loaded on to ships.

In the 1950’s, he worked with engineer Keith Tantlinger to develop a shipping container,  that could be carried by trucks and trains and be loaded onto ships, as well as being secured for long sea voyages, with a locking mechanism on each of the four corners, allowing containers to be stacked on vessels, increasing the ability to load more goods on vessels.

Malcolm McLean introduced the first container vessel into service in 1956, when he used a converted oil tanker, the Ideal X, to ship 58 containers from Newark, New Jersey to Houston, Texas.

It took nearly a decade from the sailing of Ideal X, for containerised ships to replace traditional breakbulk liner services on the major east-west trade routes and the impact of these changes greatly reduced the cost of international trade, while increasing its speed and effectiveness.

Over time the use of containers has reshaped global trade, with ports becoming bigger, while their overall number have reduced. As more types of goods can be traded and shipped, speed and reliability of shipping has enabled ‘just-in-time’ production, which in turn allowed manufacturing firms to grow leaner and more responsive to markets as even distant suppliers could now provide components quickly and on schedule.

Handling the surge in volumes, driven by the lockdown shift in spending by homebound consumers has brought unprecedented challenges and the most overwhelming impact is that containers aren’t being unloaded, reloaded, and returned to origin points fast enough, meaning that fewer (if any) containers are available, with chronic delays predicted to persist throughout 2021.

As the shipping container celebrates its 65th birthday, the container shipping lines are in the strongest financial position for many years, with the three main alliances overcoming the chronic overcapacity that has constrained revenues for decades.

The current new vessel order book of three million TEU capacity is equal to 12.8% of the world’s current fleet, but if the carriers’ capacity control discipline is permanent, an increased order book is not necessarily a sign that a new period of overcapacity is approaching.

Global supply chains are under the most intense and sustained pressure of recent times, which is why we monitor and report on the most important developments, so that you can take effective action and make informed decisions, that avoid possible issues, before they become problems.

Container shipping is facing pressure and equipment availability challenges globally, on all trades, which makes booking equipment particularly challenging and is why we request four weeks visibility and booking windows, to secure space on the vessel and get the right equipment positioned.

Please contact Elliot Carlile or Grant Liddell to learn how we can support your supply chains, even in the most challenging market conditions.

Header image: The Ideal X was originally constructed as a T2 tanker, similar to the Hat Creek shown here (August 1943) with Plan of the SS Ideal X under. SeaLand logo and McLean at railing, Port Newark, 1957. Content is available under CC-BY-SA | CC BY-SA 2.0 | CC BY-SA 4.0