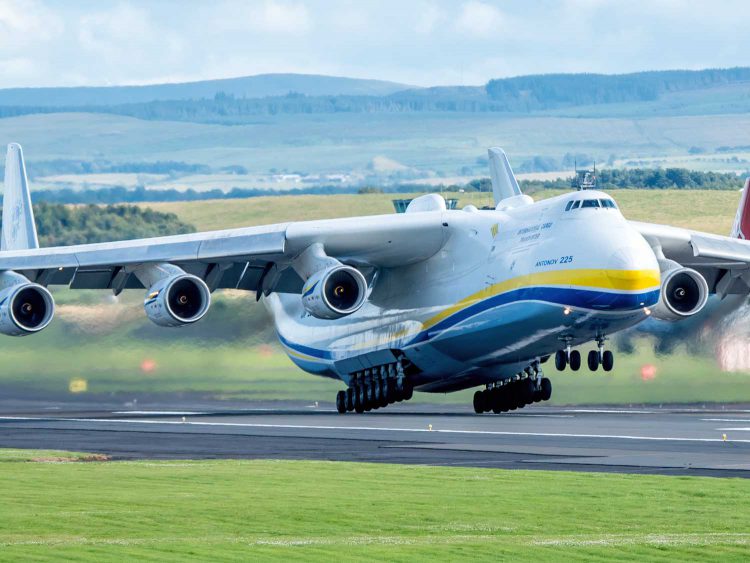 Capacity from Asia has shrunk by 22% in a week, as cargo planes that provided much needed capacity and capable of transporting heavy goods, are either sanctioned, grounded or destroyed, while airlines consider longer and more expensive cargo flights from Asia.

Air Bridge Cargo parent company Volga-Dnepr Group has capability few other carriers can match, with its fleet of twelve AN-124s and five IL-76s, both of which have heavy transport capabilities, for the largest and bulkiest freight.

Heavy-lift aircraft capability was further strained shortly after the outbreak of the conflict, when forces from Russia reportedly destroyed Antonov Airline’s AN-225 during an airfield invasion.

Originally designed to airlift rocket boosters and orbiters for the Soviet space program, the Antonov AN-225 Mriya, was the only aircraft of its class ever completed. It is the largest aircraft in the world and the only aircraft that features six turbofan engines. Able to transport up to 250 tonnes of cargo, including single pieces weighing up to 200 tonnes, it carries twice the payload of a Boeing 747 freighter.

The destruction and grounding of much of the Antonov fleet will make oversized project cargo shipping much more challenging and in the short-term may add costs and delays for many industries, most notably the energy sector.

Freight costs are likely to increase further, as are fuel costs and many carriers are introducing War Risk Surcharges to compensate for the costs of adjusting operations.

Some carriers may cancel their Asia-Europe services as they face longer and costlier routes and those carriers that do continue to fly, will pass on higher fuel costs, while the weight of the additional fuel could limit the amount of cargo carried.

Japan’s two largest airlines, JAL and ANA, cancelled flights to Europe last week, pending government guidance, because of worries about flying over Russia. Avoiding Russian airspace adds more than 1,000 nautical miles and 150 minutes to a flight between Europe and Tokyo.

Air freight has been struggling with climbing rates ever since the COVID-19 pandemic sparked a drop in air cargo capacity in 2020 but the brief window of recovery post-CNY, was slammed shut as the war in Ukraine presents a new layer of uncertainty.

With air freight capacity under severe pressure and prices rising again, driven by the Ukraine crisis and soaring fuel prices, our reliable sea-air solutions provide the cost-effective and dependable alternative.

Sea/air offers significant cost savings on air freight, with accelerated transit from Asia, of just 12 days via Singapore from initial vessel departure, and 20 days through our Dubai hub, with typical savings of 70%.

To explore our time-sensitive solutions and the viability of sea/air for your supply chain, please contact Elliot Carlile.